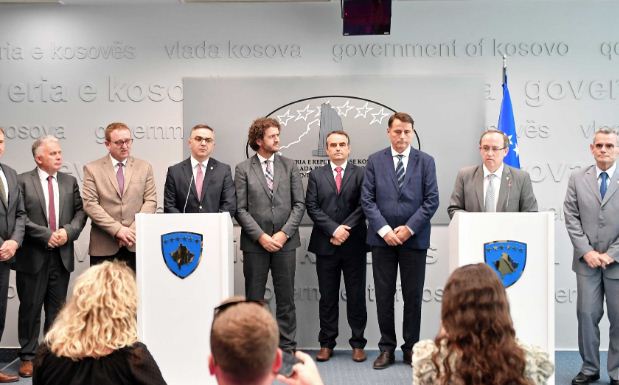 The Prime Minister of the Republic of Kosovo, Abdullah Hoti, received the rectors of public universities, with whom he talked about the development of higher education in the country. The meeting was also attended by the Rector of the University of Mitrovica “Isa Boletini” (UMIB), Prof. Dr. Alush Musaj, who congratulated the Prime Minister for his duty and support and the Minister of Education for public universities.

At the meeting, the rector informed the Prime Minister about the challenges and successes of academic life in Mitrovica. He spoke about the consolidation of UMIB and the new university campus, which has created extremely good conditions for students and professors. “After 30 years of traveling outside the university facilities in the north of the city, we are located on the new university campus built with funds from the Government of Kosovo, for which we are very grateful.”

Other important topics for universities, such as temporary statutes, legislation, research projects, etc., were also discussed. For all this, the rectors pledged to move forward in order to create the best possible conditions for the work of the universities.

Prime Minister Hoti said after the meeting that he had informed the rectors about the governing program in the field of education “We agreed on regular meetings regarding the priorities we have in the program, starting from the necessary legal changes that must take place in higher education to prepare these institutions for the needs of the labor market in Kosovo and beyond. “.

Also, Prime Minister Hoti said that the rectors agreed on the need to work together to profile public universities, always in line with quality standards and the need for the labor market not only in Kosovo but also beyond. “We will help all these institutions to meet the conditions regarding the requirements of the Kosovo Accreditation Agency and we also agreed on some immediate actions that should take place in public higher education in terms of approving the statutes in The Assembly of Kosovo of universities, in order for these universities to have the opportunity to increase their independence and autonomy from the Ministry of Education, including financial independence starting from January 1, 2021 “, said Hoti.