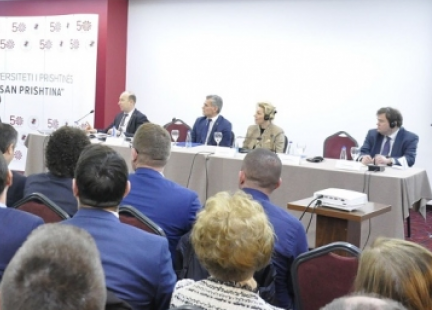 The Rector of “Isa Boletini” University in Mitrovica, Alush Musaj, attended the conference “University, Politics and Core Values ​​of Higher Education”, which was held in Pristina on Thursday. Present at the event organized by the Rectors’ Conference, within the framework of the 50th anniversary of the University of Prishtina, besides the rectors of public universities, were also the Prime Minister, Albin Kurti, Minister of Education, Science, Technology and Innovation, Hykmete Bajrami, Chief of the EU Office in Kosovo, Nataliya Apostolova, etc.