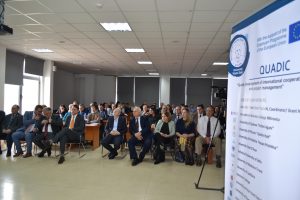 The Vice-Rector, Behxhet Shala, represented the University of Mitrovica “Isa Boletini” (UMIB), in the opening ceremony for the implementation of the QUADIC project (Quality development of international cooperation and project management), at the University “Kadri Zeka” (UKZ) in Gjilan. The Rector of UKZ, Bajram Kosumi, initially greeted the participants and also thanked those who are committed to this project.

The QUADIC project is the first of its kind in Kosovo, which has to do with capacity building for international projects. Otherwise, Kadri Zeka University in Gjilan is the project coordinator, while it will be funded by the European Commission in the amount of 991,381 Euros.